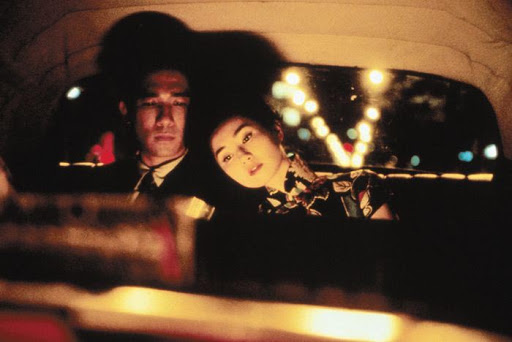 The poetry of unfulfilled love. The passing of time. The melancholia of loneliness.

If you missed the introduction article about this Cinema Influences series, you can find it here.

I needed more time to write this one intro sentence than the rest of this article (yes I write unchronologically). And I don’t know why exactly, because those themes and their weight and sad beauty is the reason I return to the films of Wong Kar-Wai so often. Plus, in this is very important in visual storytelling: he is a master of the “show don`t tell”-rule of screenwriting. So often his visuals prove that in masterful compostitions and beautiful frames.

Well, it is not the only reason to be frank. There are many reasons. From great performances of some of my favorite actors ever, like Tony Leung or Maggie Cheung, to beautiful soundtracks, wonderful subtle scripts that come to life in midst of dreamlike, operatic and beautiful set pieces from Hong Kong neighbourhoods, apartments or underground soup kitchens to endless tunnels and cafe bars at night.

And yes, I`ll show you a lot of movie stills – this is about visual art after all.
The chinese director Wong Kar-Wai made his debut film “As tears go by” in 1988 with a cast filled with future superstars of Hong Kong movie heaven. Names like Andy Lau and Maggie Cheung must resonate with European and American movie fans well since then.

Characters hanging in deep melancholia, suffering over unfulfilled or even forbidden love, wandering in hopeless nights wanting to connect emotionally to one another.

Characters hanging in deep melancholia, suffering over unfulfilled or even forbidden love, wandering in hopeless nights wanting to connect emotionally to one another. It sounds slow paced and sad. And some of it is. But it is a beautiful magical experience. Visual storytelling combined with wonderful scripts and performances.

Those films, in my opinion, would also have a big impact, shown as selected stills in a photobook. I am convinced every frame is a seperatly crafted and composed like a street photographer (or any photographer for that matter) would do.I dont know many directos who show this kind of carefully crafted and thoughtfull visual commitment.

The early to mid 90s were, a feast for the independent film and a whole “second new wave”, as I like to call it, and brought up so many now established and beloved filmmakers from all over the world. I dont need to mention people like Quentin Tarantino, Richard Linklater, Ang Lee, The Coen Brothers, Pedro Almodovar or Lasse Hallström.

lonely people in a fast paced and busy city that deal with lost love, their longings and new beginnings

For many people Wong Kar-Wai became a known name in 1994 when he released “Chunking Express” (named after the Chungking Mansions in Kowloon, HK) featuring Tony Leung, Brigitte Lin, Takeshi Kaneshiro and Faye Wong in the main leads. The film, split in two parts and two separate plots, tells the story of lonely people in a fast paced and busy city that deal with lost love, their longings and new beginnings. Even though the later “Happy Together” won at the Cannes Film Festival in 1997 for best director, script/dialogue, it was mainly Chungking Express who established Wong Kar-Wai as a filmmaker with a unique voice and visual style to European and American audiences.

Trough the help of Quentin Tarantino`s Distribution Company “Rolling Thunder” (under Miramax), the DVD of “Chungking Express” was released in early 1996 in North America. Riding on the success of “Reservoir Dogs” and “Pulp Fiction”, Tarantinos Love for Wong Kar-Wai`s film, secured its place in every movie lover`s archive outside of Asia.
Later (scandalous late in my opinion) the film became part of the Criterion Collection. This was in 2008.

It was my first film by this outstanding Shanghai-born Hongkong filmmaker. I did my research and picked up every other film of his that I could find. Together with cinematographers like Christopher Doyle or Weiqiang Liu, he influenced a broad spectrum of art from photography, film, music videos to novels.

Enough said. Go watch everything you find by Wong Kar-Wai. You will fall in love.

The one film of his I have to mention before I wrap this up, is of course “In the Mood for Love” which he shot in the year 2000 starring Tony Leung and Maggie Cheung. The cast is not really a surprise, but I love it.

The story about two neighbours (Leung and Cheung respectively) meet over their suspicion that their spouses are having an affair with each other. While they are getting to know each other they agree to keep their own relationsship platonic, to not commit to the same wrongdoings.

Beautiful story, amazing cinematography and a visual firework. Every shot is marvellous. The music will haunt you. This is definitely a film that will stick with you.

Enough said. Go watch everything you find by Wong Kar-Wai. You will fall in love.