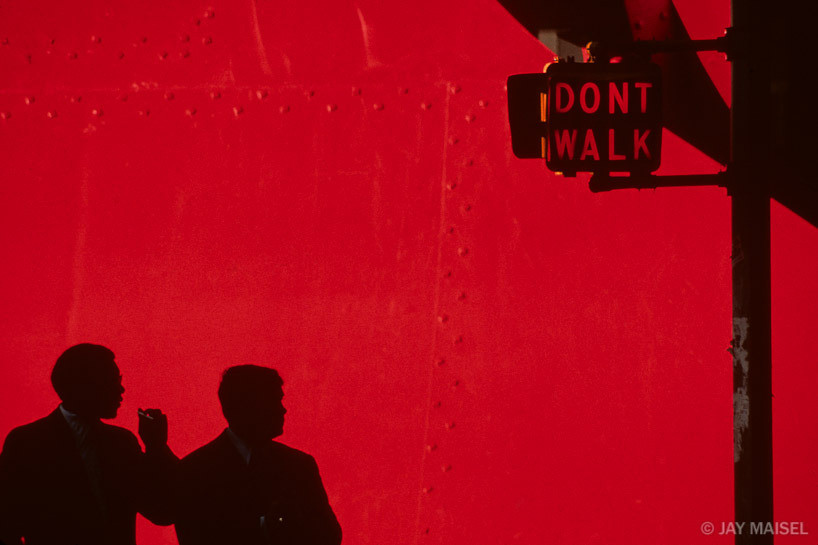 A great way to introduce Jay is through his own voice. He is a fantastic photographer, and he usually doesn’t mince his words. Below are questions Jay answered in various interviews.

What’s photography really all about?

Photography is about everything but photography. (this is a quote from Sam Garcia)

Who were the most important photographers? (from an interview with John Paul Caponigro)

I think classification and judging are ridiculous.

What is your most marked characteristic? (from an interview with John Paul Caponigro)

The whole world now shoots everyday street scenes, why are yours more magical than theirs? (interview with David Dye)

I throw away the bad ones.

This should give you a good introduction to Jay.

Jay was born in 1931 in Brooklyn NY. He studied painting and graphic design at Cooper Union and Yale University. He began career in photography in 1954.

But he is perhaps best known for capturing the light, color, and gesture found in everyday life.

It is about, in Jay’s words to “see and show others not just the superficial, but the details, the meanings, and the implications of all that you look at …”

He worked as a commercial photographer through the 90s and then focused more on his personal photography, as well as becoming a teacher to others.

The image above is from one of his commercial assignments, he explains in his book how he captured it.

A book I love and find very inspirational is Light, Gesture, and Color. What’s so great about his book is that he talks about each of his images and how they were created, without being technical about it. In fact, he prides himself of never talking about composition for example.

According to Jay, there is no bad light. I wholeheartedly agree. Jay often talks about photographers who say “I won’t shoot in the middle of the day” “I only shoot at the golden time”. He then goes on to show images shot during mid-day, and of course, those images are fantastic!

“There is no bad light.”

What is gesture? Jay is being asked this a lot. And it is difficult to explain. But he thinks the best is probably essence …. characteristic is good as well.

In Jay’s words gesture “reveals the essence of each thing we look at …. he also calls it the “it-ness” of anything we shoot.

It is about, in Jay’s words to “see and show others not just the superficial, but the details, the meanings, and the implications of all that you look at: the wetness, the reflectivity, and power of water; the subtlety of clouds; the texture of the bark of the tree; the delightful surface of a finished piece of wood: the smoothness of a baby: the rough ragged face of the aged: or the aerial perspective of diminishing clarify tin a series of mountains.

It’s obvious that it’s not just people who have gesture. It’s in everything we look at: chairs, tables, houses, cars. If we look … it’s there.”

In an interview with David Dye in 2018 he was asked:

“Gesture trumps graphics”. What do you mean?

As the years have gone on I’m less interested in the form of pictures than I am in the content of pictures.

I’m less in interested in visual patterns than I am in the behaviour going on in the picture.

However, I still think that you can ruin a picture by not being aware of what’s in it.

Jay is not highly technical, or to be more precise, doesn’t talk a lot about technical aspects of photography. But it is clear that Jay understands color theory including additive and subtractive color. In an interview he also talks about how he gets “emotional” when the color of a monitor for example is not correct.

Jay says that one color means nothing. Only when color relate to each other, things become interesting. He talks about how the impressionists used additive color in an exceptional way, for example, the put a blue next to a yellow and the observer would see pure green.

He states that we as photographers have to be aware of subtractive color. He explains how by one can change a neutral grey by putting it next to a cool green (then the grey will look warmer), or to a warm red (in that case the grey will look cooler).

In the end, Jay states Color just “is”. Stay open to it, he says. Don’t plan for it, don’t look for a particular color. Just stay open, be loose and color will come to us.

“Color just “is”. Don’t plan for it, don’t look for a particular color. Just stay open, be loose and color will come to us.”

To sum up, I find Jay’s work very inspirational.

The best thing to do and to understand the light, color and gesture Jay is talking about is to review his work. If you are not familiar with him, a good start is to just do a google images search on Jay Maisel. However, much better is to getting your hands on one of his books. I highly recommend his book Light Color and Gesture and also It’s not about the F-stop. I am sure his other books are great, too, those are the ones I own.

His website is also very informative with lots of his imagery and other resources.

Below are some additional resources where you can study Jay’s images (and his personality) in more detail:

Interview with Jay about color https://blog.xritephoto.com/2015/10/colortalk-xrite-coloratti-jay-maisel/#sthash.jhKVee9k.gOXge0WU.dpbs