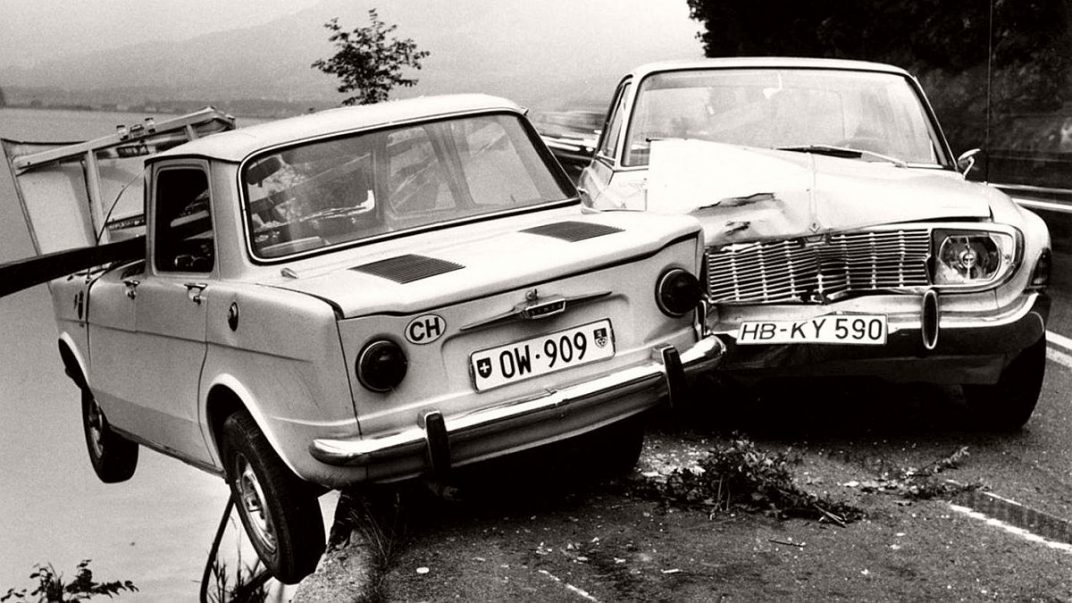 On June 19, 2021, Arnold Odermatt died at the age of 96. His career led him to become one of the most influential Swiss documentary photographers of the 20th century. But it was a very unusual one.

A baker and pastry chef by training, he was diagnosed flour dust allergy. In need of a different professional path, he turned to the Swiss police forces which he joined in 1948, at the age of 23. As a policeman, he started using his Rolleiflex to take photos of car accidents instead of making sketches that were mostly used at the time. He didn’t do so for artistic purposes but to document what happened as evidence for court cases or investigations by insurance companies (and to work around his poor drawing skill) . In hindsight, this sounds like a very reasonable and obvious thing to do but it wasn’t at the time. His superiors were not supportive of Odermatt`s initiative. In his early years, Odermatt needed to develop his photos in his kitchen at home and smuggle them into the police files.

Odermatt did not see himself as an artist or a documentary photographer. He was a police officer with heart and soul and, over the years, raised through the ranks. When he retired in 1990, he was recognised as an outstanding police commander but not yet as an outstanding photographer. Having worked in rural Switzerland all his life and having focused of a very specific kind of technical photography, this is no surprise.

It was only in the following years that his son Urs, a documentary filmmaker, discovered the work of his father while researching for a film. He was thrilled with what he saw: beautifully composed, very factual and technically perfect images of car accidents. Images that explore disasters, big and small, from all angles and tell a lot about the tragedy and lives behind them.

In 1998 Odermatt finally entered centre stage. Harald Szeemann saw some of his work that were at display at, unsurprisingly, the Frankfurt police headquarters. When he curated the 49th Venice Biennale in 2001 he presented a selection of 32 Odermatt images. Other big exhibitions followed soon: at The Art Institute of Chicago, at the Museum Morsbroivch in Leverkusen (both in 2002) and at the Fotomuseum Winterthur in 2004, to name a few. And Steidl signed him to publish his work in four volumes.

In order to unpack Odermatt`s aestetics, let`s start with his subjects: cars and buses after they crashed into other cars, a wall or through crash barriers into a lake. On the face of it, this are horrible subjects and the work of Weegee and other springs to mind. However, there are no dead or injured people in Odermatt`s photos, no blood. Just crashed bodies of vehicles, intertwined and merged into what a critic called “involuntary sculptures”. It is up to the viewer to add the human side, the tragedy behind the accident.

At the same time, we don’t see a road cluttered with parts of cars. What we see is highly reduced, almost tidy and at times minimalist scene, without any clutter. Odermatt composed his images very rigorously and well thought through. The vantage point helped his compositions. Often times, Odermatt climbed onto the roof of the police van and shot from a high angle. Shooting from high up, he had everything in sight and could arrange the elements of his composition by moving around on the car roof or by moving the car.

Although Odermatt is mostly known for capturing car accidents, his interest and curiosity was much broader. His work is covered in four major books: Collision, On Duty, Off Duty and After Work. As the names suggest, they grow out of Odermatt`s life and profession. Subject vary but it is the same style and ascetics that keep his work together, as an outstanding body of work.

WIth Arnold Odermatt we lose the last representative of the generation of great Swiss photographers born before World War II. His unique body of work will remain.

If you want to know more