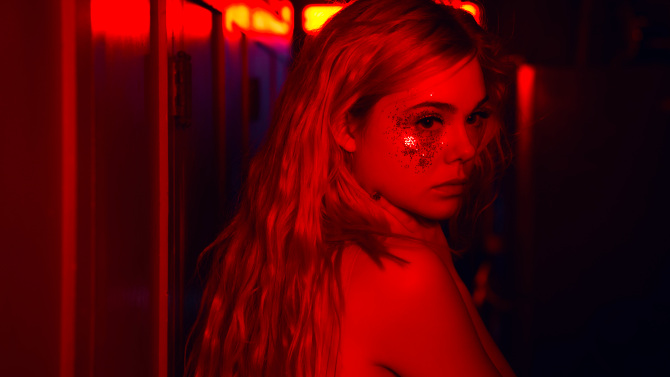 Before I tell you something more about Nicolas Winding Refn and his work, here are some stills from his movies “Only God Forgives” and “The Neon Demon” respectively.

Nicolas Winding Refn is a danish director and screenwriter. Before his breaktrough film “Drive”, he worked on a trilogy called “Pusher” with Mads Mikkelsen, with whom he later shot the film “Walhalla Rising” and he allowed Tom Hardy to craft one of his most famous performances to date in “Bronson”. Personally I categorize his work in three phases – but more of that later.

The most important reason I want to introduce him to you, is his visual style. Sure it has evolved and changed, but that also has to do with the various creative phases I think.Still, there are strong visuals that may be attractive or at least interesting for people interested in visual arts, like photography.

Its lead actor, the now very well known Tom Hardy, and the furious theatrical way it was filmed, made it critically successful

He was a young up- and coming filmmaker in Denmark and altough his first English spoken film “Fear X” wasn’t successful and almost cost him his career, he succeeded with his second English spoken film “Bronson” about the criminal and Outsider Artist (art brut) “Charlie Bronson” in the U.K. This film wasn’t a financial success as it just broke even at box office. But it`s lead actor, the now very well known Tom Hardy, and the furious theatrical way it was filmed, that made it critically successful.

This reminiscence of 80s style and music was a critical and financial success and paved the way for the ultra-violent thriller “Only God Forgives” in 2013.

The next works started what I call, his third phase. The first two being slightly intertwined. The Danish films being the first and the more experimental films in the U.K “Bronson” and “Walhalla Rising” being the second phase.

The third phase (and I never heard anyone else call it that), started with “Drive” in 2011 which is probably the one movie of his, that entered the zeitgeist and is referenced a lot in pop culture.This phase is clearly the visual most stimulating. Using primary colors in a broad way, he basically foreshadowed in “Bronson”.

This “phase three”-visual style is accompanied with 80s evoking electronical sound a beautiful lingering photography and a slow building pace that belongs more in the american cinema of the 1970s.

A sense of stylish perfection and precision that reminds you of Stanley Kubricks “2001 – A Space Odyssey”.

Three years later one of his finest films was released by the name of “The Neon Demon”, which I absolutely love and rewatch every now and then. The less said about it, the better. People seem to either hate it – or love it.

If you like dark horrific films shot with the kind of 70s pacing of horror movies, beautifully visualls, atmospheric ghostly music provided by Cliff Martinez and a sense of stylish perfection and precision that reminds you of Stanley Kubricks “2001 – A Space Odyssey” then you should definitely check it out.

At the tail end of his third phase (which might will be extended someday) lies his first TV-show called “Too Old to Die Young” in 2019, which combined a lot of the elements of the previous three films such as the brooding pace and lingering quality of the shots, the satured colors, the atmospheric and pumping soundtrack and of course the ultra-violent brutality. Which has now definitely become a hallmark of Nicolas Winding Refn.

So if you like the cinematography or if you are intrigued in any way, let’s give his films a chance.

Thank you for reading and I hope you tune in next time.